One of these teams, the U11 All Stars had a fantastic day at the Mongo Gala day. This annual tournament offers a world cup experience as 16 teams from each age group are placed in pools of four. Three matches in the morning, a skill competition and re-draw over a BBQ lunch, and a further three games in the afternoon. Teams travelled from far and wide to take part. The All Stars opponents included clubs from Terrigal, Newcastle, and Auburn. The games were played in great spirit. At the start of each match the teams entered the field side by side to the strains of a mambo beat, lined up, shook hands, exchanged pennants, and got under way. The games were tough but rewarding and the enhanced bond the players drew will surely pay dividends in the winter months ahead. 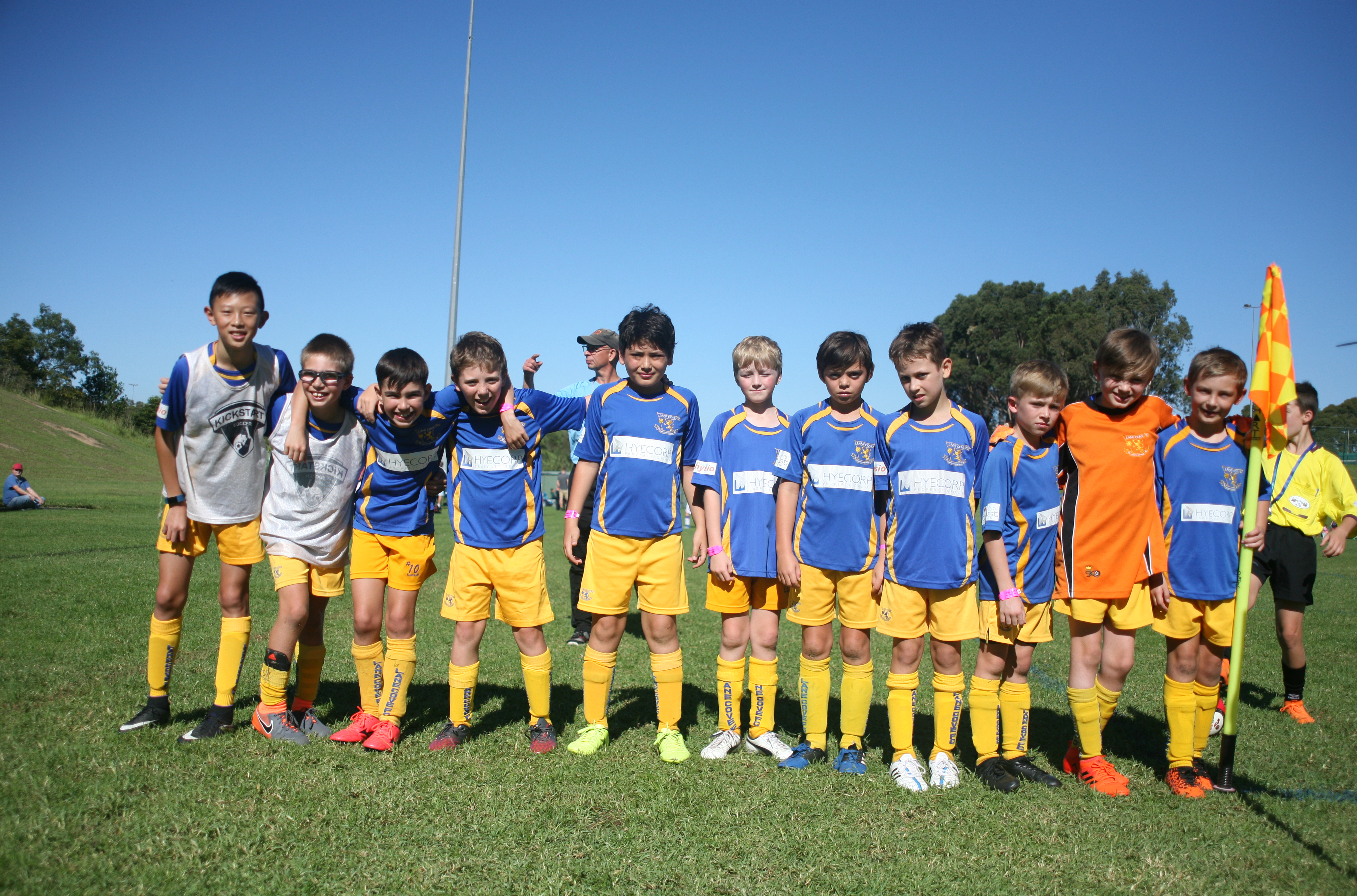 Lane Cove FC is seeking a Grounds Co-ordinator to join the team to assist in the preparation and co-ordination of game day functions at Blackman Park and Pottery Green.

Purpose of the Role:

The Grounds Co-ordinator is an essential member of Lane Cove FC that ensures delivery of an efficient and co-ordinated game day experience at both Blackman Park and Pottery Green. This includes ensuring grounds are “dressed” (nets and flags erected) for play on Saturdays and Sundays (through a roster system), and that game day amenities (Canteen and Miniroos BBQ) are appropriately co-ordinated, staffed and operated.

For more information please refer to this document.

Please join us to support our Mens All Age Premier League team against Granville Rage in their 3rd year participating in the FFA Cup.

There will be a BBQ down at the park for dinner!

Looking forward to seeing all LCFC members at Blackman Park for support. 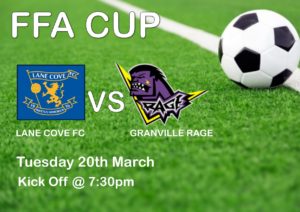 A fantastic opportunity to get involved with coaching a premier league side and learn from an experienced coach.

A great opportunity to make your mark on this newly formed squad and take a step towards coaching at a higher level.

For the second year running, we are holding combined Mens and Womens All Age Preseason Training sessions, starting 1st February 2018! These are open to players at every standard. They are an ideal way to get fit, improve skills, meet other players and help to coordinate teams for 2018. The sessions run for seven weeks every Thursday and are the perfect way to get ready for the 2018 season.

All new and returning all age LCFC players are welcome.

The sessions will be run by professional coaches from Kickstart and will involve both fitness and skills. The sessions are free of charge to any LCFC players.

Please join us on the astro turf at Blackman Park on Thursday, 1st February 2018 from 7pm. We look forward to seeing you there.

Should you have any questions, please do not hesitate to contact us. 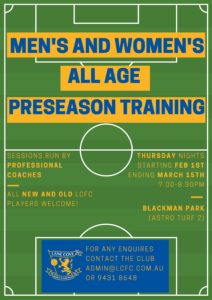 One of our O35s 6-aside teams beat SFC Alpha 7-2 and went through the entire season undefeated with 11 wins, only 1 draw and a goal difference of 62-11.

A big congratulations to this successful team! 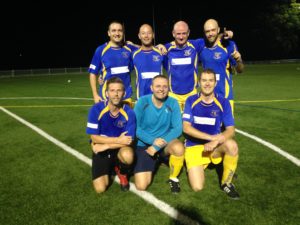 Last night one of our Lane Cove teams won the grand final of the mixed all age 6-aside competition at Blackman Park!

This team is comprised of individuals from our WAA, MAA and O35s. It also contains some very important Board members – the President, Treasurer and Secretary of Lane Cove FC.

Thank you to Northern Suburbs Football Association who organised this Summer tournament and congratulations to the successful Lane Cove team! 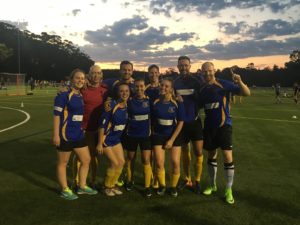 LCFC would like to give a big congratulations to Evan from the U11 dev squad in 2017, who has won the 1500m at Nationals with a record time! This achievement sets Evan up well for full pitch in 2018 with the U12s! 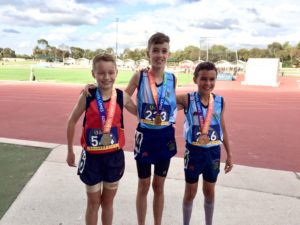 The 10 new Board Directors are:

Thank you to all Board Directors for taking on this volunteer position to help grow and improve our community club!

We would also like to thank the outgoing 2017 Committee Members for their valuable contributions. These include Byron Harris, Nick Stathakis, Amy Clarke, Aizaz Syed and very importantly Mick Hone, who served on the committee for 21 years.

A group of seven year-olds who call themselves the Benfica Rockets, gathered at a residence in Lane Cove along with their support staff to watch the Socceroos in that crucial must-win FIFA World Cup qualifier in mid-November. The Rockets are a popular football team representing Lane Cove Football Club with great enthusiasm and panache in the local U8s competition. 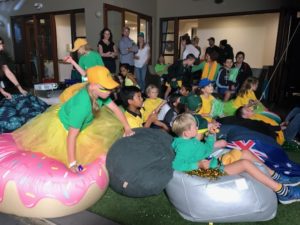 The Rockets have played together for three years; starting their careers in the U6s. It has been three years of tears, laughter, laces coming undone, wins, losses that have felt like wins and post-game treats. The support staff around them aka parents and grandparents, have formed friendships that will stand the test of time and embody the true spirit of what a community like Lane Cove is all about. It is also testament to the very important role team sports play in a community.

Apart from the thrill of watching the Socceroos qualify for the World Cup, this great team and friends had a fantastic night together. A night made very special indeed by the crew from SBS who arranged a large outdoor screen for the night and put decorations up for the special occasion, turning the backyard into World Cup Qualifier central for nearly 40 fans of all ages. There was of course the added excitement of TV cameras capturing these young Socceroos fans willing their heroes on. 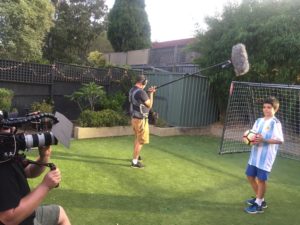 For the Socceroos and especially coach Ange, the 3-1 defeat of Honduras was the culmination of a long and arduous journey taking 22 games to qualify over two-and-a-half years despite only losing twice, which says something about how difficult it is to qualify for the best sporting competition in the world.

The match itself had everything. The nerves were jangling after an agonising first half where the Socceroos didn’t seem to be going anywhere despite having a lion’s share of the ball. When the second half got underway however, the game came alive with a very direct approach to goal resulting in a free kick smashed into the back of the net by Australian captain Jedinak. This really got the party started and two penalty kicks later, Jedi had a hat-trick and we are well and truly on the plane to Russia. The Rockets were in fine voice prompting a neighbour or two to pop over and join in the action!

Huge thanks to Lara, Jen, Lucy, Sean, Joey and Em from SBS for putting on a great night. 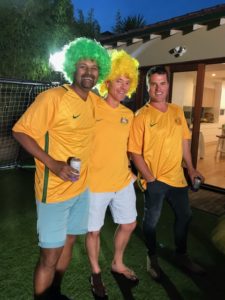 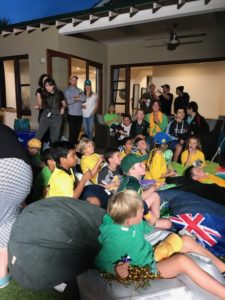 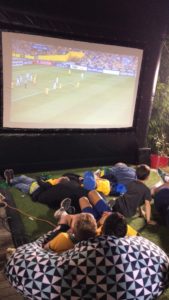 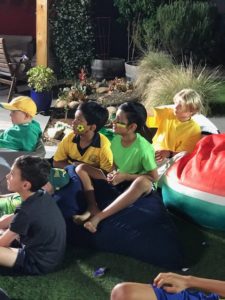